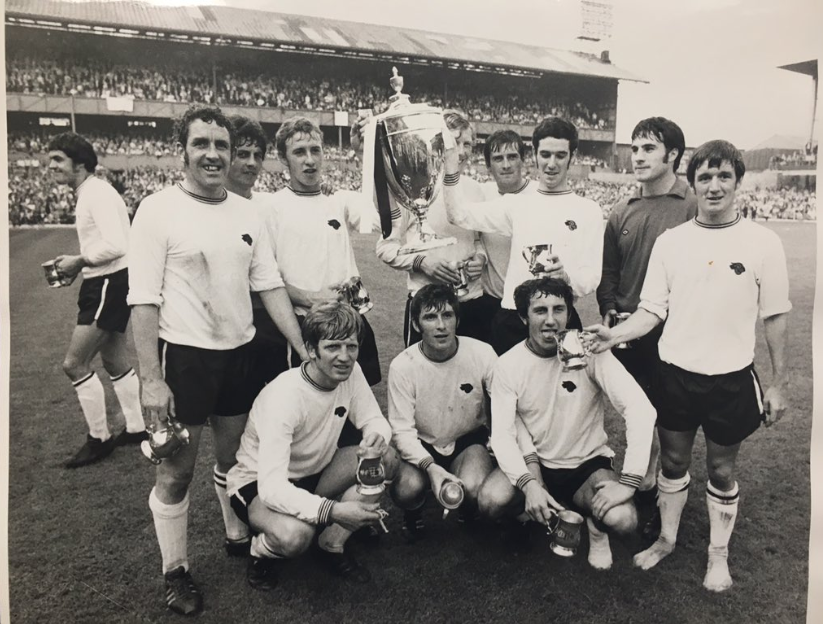 On 8 August 1970, Derby County lifted the Watney Cup at the Baseball Ground following a 4-1 victory over Manchester United. 50 years on we celebrate the significance of this seemingly insignificant and short-lived competition.

The Rams went into the tournament on the back of an emphatic fourth-placed finish in the First Division – their highest finish in the Football League since the 1948-9 season. This was a huge achievement for a team that had only won promotion in the previous campaign and helped to vindicate the support given by Sam Longson and the Derby board to Brian Clough and Peter Taylor. The team now set their sights on English football’s greatest prize, an unprecedented First Division championship.

The Watney Cup provided a further chance of silverware for the dynamic duo and a chance to test the steel of their developing squad against some of the top teams from England’s top four divisions. Two teams were invited from each of the top four divisions. Eligibility was based on the two top scorers in each division that had failed to win promotion or had missed out on a place in Europe.

The teams involved in the inaugural 1970 version of the cup were Derby County and Manchester United (First Division), Hull City and Sheffield United (Second Division), Fulham and Reading (Third Division) and Aldershot and Peterborough from the Fourth Division.

The cup was a precursor to modern pre-season tournaments, such as the Audi Cup, and provided fans with an early glimpse of their team following the summer break and an early chance for silverware. The short-lived competition, which lasted just three years to 1973, is still remembered fondly by nostalgic fans of the 26 teams that competed in the cup during its existence.

As well as its nostalgic value, the Watney Cup – or the Watney Mann Invitational Cup to give it it’s full name – was a turning point for English football and provided key moments that would change the course of football history. The naming rights for the tournament were sold to the Watney Mann brewery, the first time this had happened in English football. The semi-finals of the tournament also saw the first ever penalty shoot-out on English soil in the game between Hull City and Manchester United. Manchester United triumphed and faced Derby in the final at the BBG.

Derby’s journey through the competition saw them face Fulham and battle to a 5-3 victory after extra time in the searing August sunshine. Hector and Durban earned a brace each with John O’Hare claiming the fifth goal to see the Rams into the next round.

In the semi-finals, Sheffield United made the relatively short trip to the Baseball Ground after an imperious 6-0 victory over Fourth Division Aldershot. The only goal of the game was a peach from McGovern:

The ball came to young McGovern on the edge of the box. With hips of rubber he twisted and sent the entire United defence running away from him. The shot flew past Hodgkinson’s right hand and settled in the far corner.

Match report of DCFC vs. SUFC from The Watney Cup Final programme

Derby progressed and, following Manchester United’s unprecedented penalty shoot-out victory, would face the Red Devils at the Baseball Ground to be crowned the first team to lift the trophy.

The Rams’ emphatic 4-1 victory was a sign of things to come and the fashioning of a new guard in English football. You can view extended highlights of the game below with goals from McFarland, Hinton, Durban and Mackay. George Best’s consolation goal for the visitors unfortunately does not feature.

Following the game, Derby were presented with the trophy, which still resides at Pride Park stadium. The competition lasted until 1973 with another three installments of the tournament which ended with Stoke City as the final winners.

The Watney Cup paved the way for future sponsored tournaments, such as the Texaco Cup in which Derby were also victorious in 1972. Sponsored competitions are now common place in modern football with the League Cup, FA Cup as well as the domestic leagues all having branded sponsorship. Penalty shoot-outs would also become the new norm as they were introduced into European competitions to settle draws from the 1970-1 season.

Do you remember the Watney Cup? Join the conversation on social media using #WatneyCup50 and tag us using our handles in the footer section of the website.